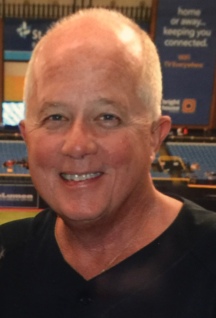 “My wife Lois became deaf later in life.  We had been married for 14 years when she became totally deaf.  Life changing, right!  I preferred to look at her deafness as an opportunity rather than an extremely unfortunate situation.   Lois and I met in a French class in college.  So communicating in a different language was not foreign to us.  Lois was also fluent in Russian.   We looked at her deafness as an opportunity to learn a different language.  We engaged a person who taught us the alphabet and how to fingerspell it.  This opened a whole new world for us.  It started out as just a fun activity but suddenly it took on a life of its own.  I immediately became empowered to be able to communicate where the spoken word could not be communicated or heard.  We found we were able to communicate across a crowded and noisy room. We could fingerspell about anything and most people did not know what we were stating.  It has become a second nature to me to sign when I am talking, even during my sales meetings and lectures.  Once people see me doing fingerspelling when I talk, it becomes contagious.  People who see me fingerspell want to learn to fingerspell, so they can communicate with deaf people they meet.  Many have people in their family that have hearing loss and now suddenly they have a way of communicating.

Fingerspelling has greatly enhanced the quality of my marriage with Lois.  I have gotten to the point where I need to slow down my fingers to enable people to understand me.  I believe this is a good problem for me to have!  I have found that fingerspelling has given me confidence, independence, and power to be able to communicate wherever I am and with whoever I am with.  Learning to fingerspell has changed my life and has opened many doors for me that otherwise would not have been opened.  Who would ever have thought that Lois’ deafness could be turned into an opportunity!”

When I finally quieted down and listened with my soul instead of my ears, I found beauty in my life as a deafened person.